With the majority of U.S. electric bicycles (aka e-bikes) being manufactured in Silicon Valley and Orange County, they are becoming much more popular here in California. Though regulations vary across the United States for electric bicycles, here is a list of laws which affect e-bike riders here in Cupertino. State laws vary depending on the type of electric bicycle you are riding.  There are four basic types:

Depending on which type of e-bike you have, you have different requirements for helmets, license plates, etc.  These requirements can vary by municipality, so check each city’s code before you ride on their roads to make sure you are in compliance.

Finally, not all the e-bikes can be used on all bike lanes!  Below is a handy chart for whether it is acceptable to ride each type in specific types of bike lanes.  For example, mopeds and type 3 e-bikes cannot be used on off-street combination pedestrian/bike paths (such as through many Cupertino Parks), and also cannot be used in barrier divided Class IV bike lanes such the ones coming to Stevens Creek Boulevard and McClellan Road in the coming years.

E-bikes used on trails are called eMBTs: electric mountain bikes.  Most trails that allow standard mountain bikes also allow eMBTs.  Some local trail areas (including the Midpeninsula Regional Open Space District and East Bay Regional Park District) ban them outright, stating concerns with overcrowding on trails, but in California State Parks, electric mountain bikes are considered bicycles and so are allowed on the same trails as traditional mountain bikes.  Locally, Santa Clara County Park regulations do allow mountain e-bikes on the trails, but they cannot be operated in excess of 15 MPH, and are only allowed in specific areas per the following chart: 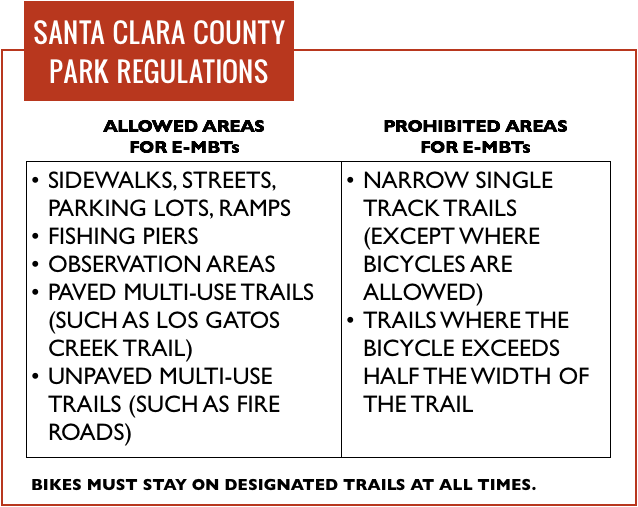 E-bikes make it easier to ride longer and faster and for more trips, and it’s been shown that they increase daily exercise precisely because of these reasons.  Make sure you are following the appropriate laws when you ride yours. {Ref Cal vehicle code 312.5, 21200-21212, 21207.5, and 24016; https://www.sccgov.org/sites/parks/Pages/Accessibility.aspx; and http://www.mercurynews.com/2016/10/06/going-uphill-fast-electric-mountain-bikes-in-the-bay-area/}