The City Council meeting of July 16th was tumultuous as expected. It included an agenda item on funding for all 2019-20 Bike and Pedestrian projects that were controversially pulled from the main budget at the request of Vice-Mayor Chao in April. Despite Vice-Mayor Chao attempts to stop funding for the Linda Vista Trail multiple times, there were some very good outcomes from this meeting. Read on to hear more how Vice-Mayor Chao attempted to kill several multi-use trails, pushback from other council members, and the uncertain follow-up coming up at the next city council meeting!

CIP funding of four bicycle and pedestrian projects was approved unanimously! One very good thing to come out of the meeting was that Capital Improvement Project (CIP) funding was approved for four bicycle and pedestrian projects, including the Linda Vista Trail (LVT). The land for the LVT was donated to the city by former Mayor Richard Lowenthal, and will connect the Stevens Creek Trail from McClellan Ranch to Linda Vista Park. The chart below shows more detail on the $2M+ new funding approved (in the far right column): 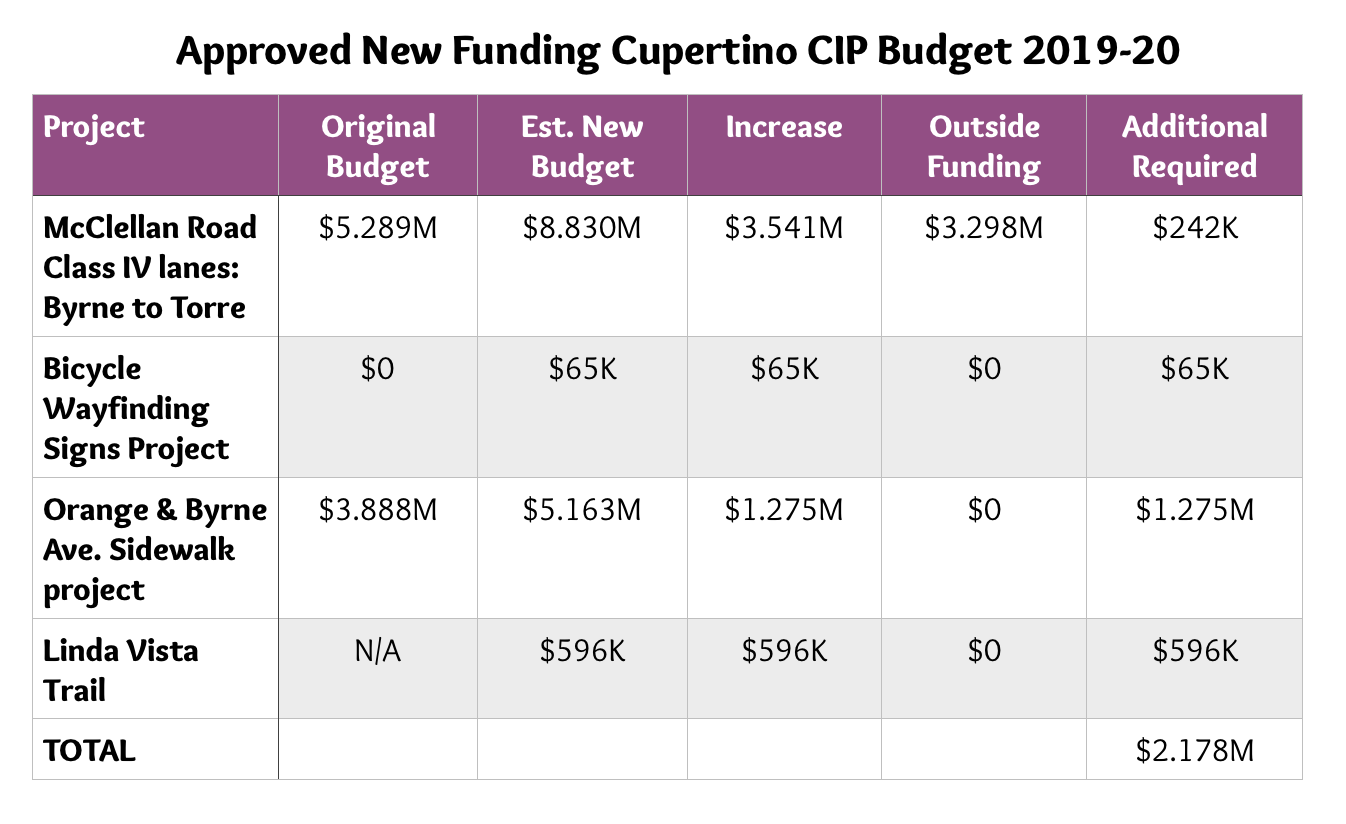 Vice-Mayor Chao argued strongly for killing the Linda Vista Trail, Carmen Bridge project, and Regnart Creek Trail. She tried multiple times to kill the Linda Vista Trail project, suggested that the city fund only half the project (approx $300,000) and let the community raise the remaining $300,000, then finally voted for it at 2:15am, when it became clear that the other four council members were planning to vote to fund the project.

Vice-Mayor Chao repeatedly expressed significant frustration with how bicycle and pedestrian projects are prioritized. She stated that the city should focus on on-street biking, especially Bike Boulevards, and discontinue work on off-street multi-use walking and biking paths like Linda Vista Trail, Carmen Bridge, and Regnart Creek Trail. Her main argument is that Bike Boulevards will improve student safety more than trails separated from cars. Her position drew an immediate rebuttal from Mayor Scharf and Councilmember Sinks who stated that, “Bike boulevards are not protected bike lanes. It will not give people the perception of safety.” (See below for more information on Bike Boulevards and why they aren’t the best option for students.)

Mayor Scharf and Councilmembers Sinks and Paul all stated there is no situation of “either/or” where they city must choose to either fund bike boulevards or off-street multi-use projects, the city can fund both.

Roger Lee, Director of Public Works, also explained that the city has made very good progress on the Bike Boulevards and has funding for Phases I and II, with Phase II in the process of being implemented.

During discussion, Vice-Mayor Chao repeatedly claimed the process for prioritizing walking and biking projects is not transparent and she doesn’t understand how a project gets moved up in the priorities. Despite significant prioritization details being provided by city staff, she continued to claim that bike boulevards have been pushed down in priority, without offering any supporting data..

Roger Lee responded that both the 2016 Bike Plan and the 2018 Ped Plan went through a very transparent and long prioritization process with an extensive 18-months long period of community input for each plan. Mayor Scharf and council member Sinks concurred.

As a result of this vigorous push by Vice-Mayor Chao, two items were added to the agenda for the next City Council meeting on August 6:

Vice-Mayor Chao has expressed a clear desire to change the priorities of walking and biking projects based on her personal preferences. Those who care about these issues need to be active and vocal, as this is clearly going to be an ongoing issue. 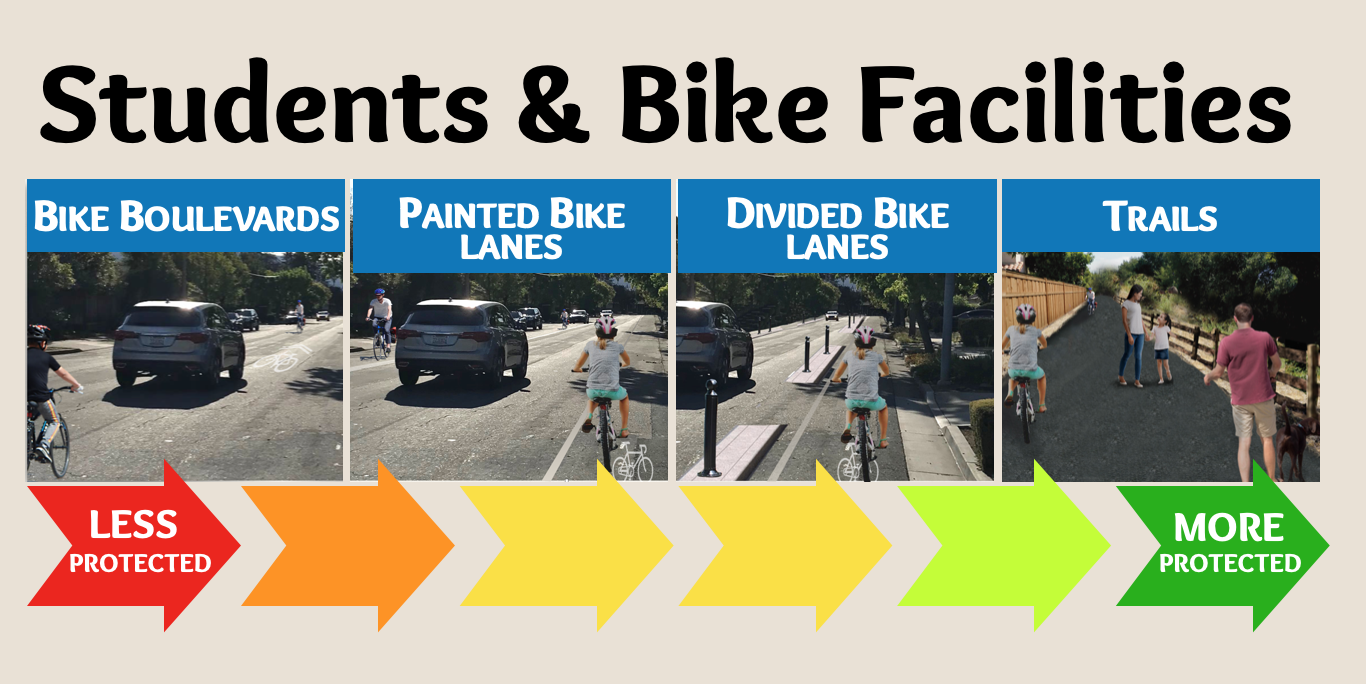 Vehicles simply pose the greatest threat to all cyclists and pedestrians, including students biking to school. As Bike Boulevards are Class III lanes, they only add  painted “sharrows” (“share the lane” arrow markings) and speed bumps. Every Bike Boulevard in Cupertino will have children biking while sharing the lane with cars. There will be no painted or divided bike lane, due to width constraints with on-street parking.

Though they do have benefits for more experienced cyclists such as commuters, for residents in the area and for pedestrians, there is no indication that these Bike Boulevards will increase safety for our cycling students. A 2016 study by the University of Colorado compared road safety for cyclists in bike lanes, on streets with sharrows, and without any ‘safety’ updates. They found that bike lanes encourage more people to bike and make biking safer, while sharrows (Bike Boulevard treatments) don’t do much of either.

A trail that is completely separate from cars will always be much safer than on-street biking, especially for students or less experienced cyclists.

A great example of a trail that will be beneficial to our students is The Regnart Creek Trail, currently in design and scheduled for a vote in September. It will connect to the Creekside Park trails and the upcoming Class IV physically separated bike lanes on McClellan. The trail will create several miles of completely protected biking for hundreds of our students to multiple schools and to the library. The Bike Boulevard projects are currently spread out piecemeal around the city and do not impact bigger intersections. This further reduces their safety and effectiveness as a commute path for students. 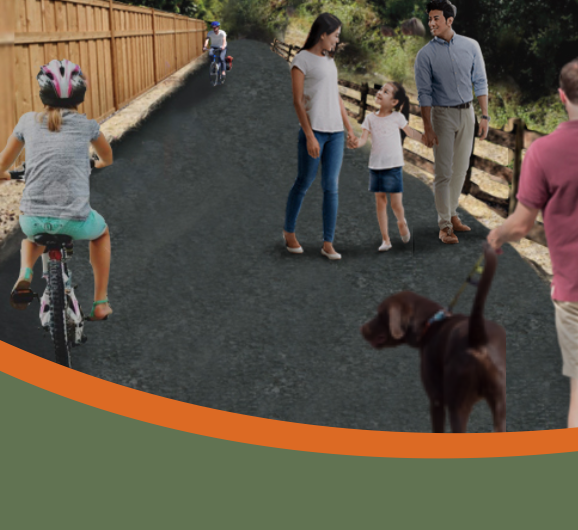 Join Your Walking and Biking Neighbors On Our New WhatsApp Group.  You have questions and suggestions. We’d love to hear them. You want to organize a biking or walking event? Let’s do it!
Join our new WhatsApp group to interact in real time with Walk Bike Cupertino board members, Bike Ped commissioners, and your fellow neighbors who love walking and biking. We can discuss latest happenings, get to know one another, and socialize. To join the group, just go to the link shown in the image above on your mobile phone.