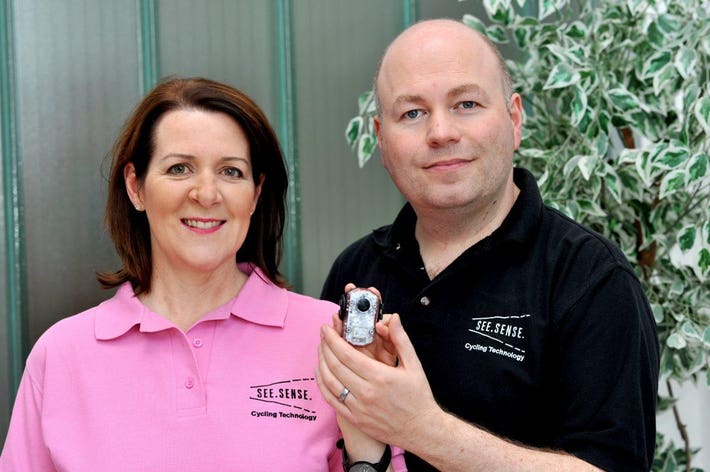 “This is the graphic that really excites city planners,” says Irene McAleese, one of the directors of Limeforge, a tech company based in Northern Ireland.

She’s gesturing at side-by-side maps on a PowerPoint slide. Both feature what look like scribbles but are, in fact, plots of cyclists traveling along two roads in different parts of central Manchester, England.

The slide is headlined “Evidence to show performance of cycling infrastructure,” and the plots comprise hundreds of blue and yellow lines representing real journeys made by sensor-equipped cyclists. On the left-hand map, the lines are jagged and confused – that’s a standard road with cyclists mixing with cars, busses and darting pedestrians. The plots on the right-hand map are bold, straight, and uniform – that’s a road with a curb-protected cycleway.

“You can see where the end of the [cycleway] finishes on Oxford Road,” says Irene. “The speed [of the cyclists] drops, there’s less directionality as cyclists are now probably weaving around pedestrians, avoiding car doors and the like.” 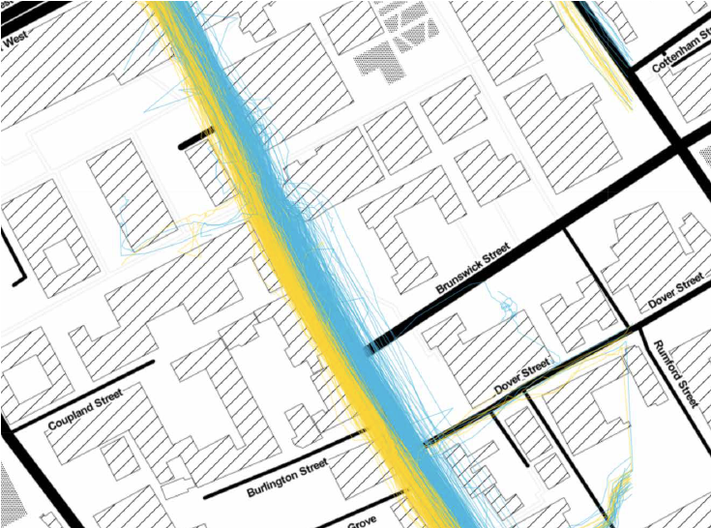 Bicycle journeys on a Manchester road benefitting from a protected cycleway – lines are straight, showing cyclists are weaving less, and traveling faster.LIMEFORGE

For planners attending her presentation, it’s a vivid demonstration of the benefits of protected cycleways. The cyclists travel straighter and, with less to worry about in front of them, faster. 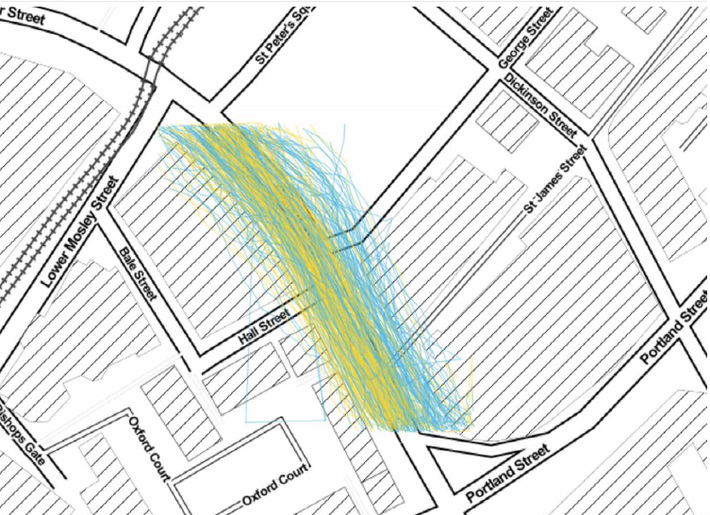 Bicycle journeys plotted in Manchester on a road without protected cycling infrastructure – the lines are jagged.LIMEFORGE

This data disparity is a significant disadvantage for clean, sustainable bicycling. Without data, it’s easy for planners to neglect cycling.

If bicycle journeys could be plotted in the same way as car journeys, thought investment banker Philip McAleese, this data would be useful information for urban planning. Along with his wife he created a tech company that put sensors on bikes, sensors that would not just plot journeys but also measure road roughness so city planners would know where smoother asphalt is needed or where potholes are forming.

Potholes cost municipalities millions of dollars in claims from injured cyclists and through damage caused to motor vehicles. But it’s even more expensive to monitor city streets for the formation of potholes. Few cities have access to specialist pothole-spotting measurement vehicles. Most rely on visual inspections that are sporadic and, to do comprehensively, costly. However, early identification of potholes can significantly reduce municipal repair and legal bills.

As their lives can often depend on it, cyclists are expert pothole spotters, and cities which harness this skill could significantly reduce their repair and legal claims bills, making Limeforge’s rolling sensors potentially very useful. Kinks in Limeforge’s plots are where cyclists make faceplant-averting detours, pinpointing where potholes have already formed.

Branded as See.Sense, the lights – and the £1-million company behind them – have won multiple design, tech start-up and big data awards, including a Spectator magazine Economic Disruptor Award, the Highways UK Innovation Challenge for Safety, and – in partnership with British telecoms giant BT – the Big Chip Award for Best Internet of Things project.

Limeforge has also raised money from equity crowdfunding. It raised £711,000 on Crowdcube in 2016. Traditional venture capitalists have also invested in the company, including Techstart. In 2017 the company raised a further £400,000 from existing investors plus Clarendon VC.

British Cycling is headquartered in Manchester, and – not coincidentally – the city is aiming to become Britain’s preeminent “cycling city.” This plan is spearheaded by Chris Boardman who gave up lucrative and high-profile TV punditry to devote more time to his newly-created role as Greater Manchester’s walking and cycling commissioner. The former Olympian – his 1992 gold medal kickstarted Britain’s later success in cycle sport – unveiled maps for Greater Manchester’s £1.5-billion protected cycleways earlier this year. They have been branded as Beelines. (A worker bee has been a symbol of Manchester’s industrious endeavors since 1842.)

The bicycle-journey plots that wow city planners were created in a trial operated with Manchester City Council. Hundreds of cyclists were equipped with heavily subsidized lights, and they were asked to pair them with their smartphones to enable even more anonymized data to be collected. (In the future it could be possible for cities to reward cyclists for providing this sort of rich data.)

The cyclists chosen for the Manchester trial were everyday commuters, rather than racing cyclists. Thirty percent were women. The resulting plots not only showed where cyclists swerved, and where they seemed to achieve a Zen-like state of steady riding, they also showed planners where cyclists were taking short-cuts or not using the cycling infrastructure as the designers intended.

Using real-time data from actual journeys from everyday cyclists could prove transformative for cities looking to install “desire line” infrastructure that gets used by the target audience.

Irene – born in Australia but now a British citizen – is Limeforge’s marketing and strategy lead and Philip is the company’s chief tech-head and CEO. They met through a mutual friend in 2001.

“We lived in London for nearly seven years, and Philip and I were married and had our daughter there, before we moved to Singapore in 2008.”

Philip, 44, worked for Barclays in Singapore, and Irene, 45, was a human resources and management consultant in the Asian city-state. Philip was educated at Queen’s University of Belfast where he studied electronic and software engineering. After university, he designed air traffic control simulators for the U.K. equivalent of the Federal Aviation Administration. Irene worked for Queensland Rail in Australia before moving to the U.K.

“It was in Singapore that Philip came up with the idea for the bike light and we decided to give up our successful corporate careers to move to Northern Ireland, and start See.Sense. What started as a quest for better lighting to improve safety for cyclists has now evolved into the bigger vision to help transform cities for cycling through use of data and insights that help cities plan more efficiently and effectively.”

See.Sense lights aren’t just bright and connected; they are also intelligent – smartphone accelerometers typically take 15 readings per second, See.Sense lights can take as many as 800. That’s a lot of data to be crunched, but it also enables a key advantage: battery conservation. The lights flash brightest at moments of AI-predicted danger – at a roundabout, for instance, or when a motorist tailgates a cyclist – but for the rest of the time, the USB-recharged batteries conserve energy allowing See.Sense lights to remain tiny but still pack a punch.

The inspiration for their creation came while Philip was riding amongst Singapore’s aggressive, impatient drivers.

“If there’s a millimeter of space, somebody will drive into it,” he says. “Drivers in Singapore think nothing of passing a cyclist and then immediately turning left into their path. I wanted to be more visible to them during the commuting peak times of dawn and dusk when most small bike lights are not so effective.”

The lightbulb moment – an LED lightbulb, of course – came during a ride to work looking at the smartphone attached to his handlebars.

“I thought: there’s a lot of sensor technology on these devices and I wondered if we could use some of that cleverness to develop a light that’s bright when it needs to be and conserves energy when it doesn’t. Light performance is usually a trade-off between high brightness, long runtime, and compactness. See.Sense lights are small and use power intelligently, enabling them to be bright when you need it but still have a long runtime.”

The lights also flash faster when cyclists near intersections, or when going into pitch-black road tunnels.

“Imagine you’re coming up to a roundabout,” McAleese explains. “You’ll pause fractionally to look at the exits and decide how you’re going to tackle them. Sensors detect that pause. Via vibrations, the lights then measure the grippier running surface usually found before yield signs at a roundabout.

“The next tell-tale sign will be as you start to position yourself. The lights now assume you’re at a roundabout and – fore and aft – they increase the flashing patterns and brightness to increase visibility.”

Limeforge is based on an industrial park in Newtownards, ten miles east of Belfast. The lights are made 19 miles away in a factory in the small town of Ballynahinch. The rural factory is owned by Nitronica and has been Limeforge’s contract electronics manufacturer since day one. Nitronica is a £10.5-million PCB assembly specialist and, pleasingly for Limeforge in its start-up phase, the former Plessey factory was able to handle small-batch production. 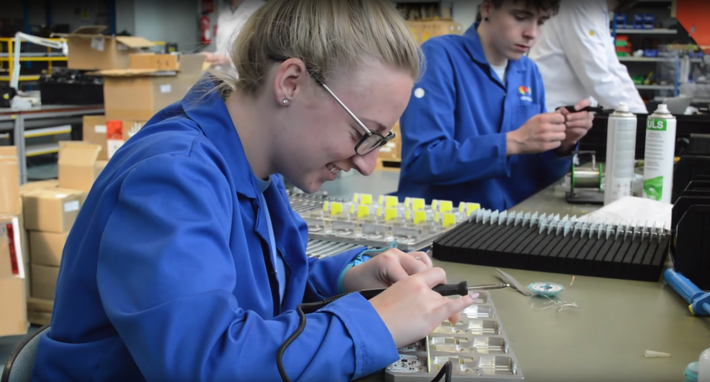 That See.Sense lights are not made in China is a key selling-point, but there are other benefits to proximity, including reduced travel expenses and greater production flexibility as well as hands-on control over the manufacturing process.

With the company’s latest Kickstarter campaign standing at over £60,000 in pre-orders there’s a proven demand for See.Sense lights and Irene is happy that Limeforge is one of the key companies in the emerging “internet of bicycles” space (others include Strava).

“Cycling helps to reduce congestion and pollution in cities, and is good for health and wellbeing,” she says. “We get a real buzz from being part of the movement trying to influence that.”

Follow me on Twitter @carltonreid
I am the Transport Journalist of the Year in the Press Gazette British Journalism Awards For Specialist Media 2018. I write about bicycles and research transport history books.