Finally, A Car Manufacturer Gets It Right On How To Correctly Pass Cyclists

Carlton Reid Contributor  TransportationI am Press Gazette’s Transport Journalist of the Year, 2018
Spanish automaker SEAT has released promotional materials for its new SUV that promotes the correct distance a motorist should leave when overtaking a cyclist. On 10th December, SEAT sent out a press release for the 2019 version of its Tarraco SUV and this included photos and videos of engineer Esteban Alcantara overtaking two cyclists by moving wholly into the opposite carriageway. “In order to overtake cyclists correctly: reduce the speed and maintain the safety distance,” stated the press release. It is highly unusual – possibly even a first? – for a car company to promote such a critical safety message.

Rule 163 of Britain’s Highway Code states “give motorcyclists, cyclists and horse riders at least as much room as you would when overtaking a car” and illustrates this advice with a photograph of a motorist leaving a full car’s width when overtaking a cyclist. Many other countries have similar “close passing” laws and maxims, although they are rarely enforced. 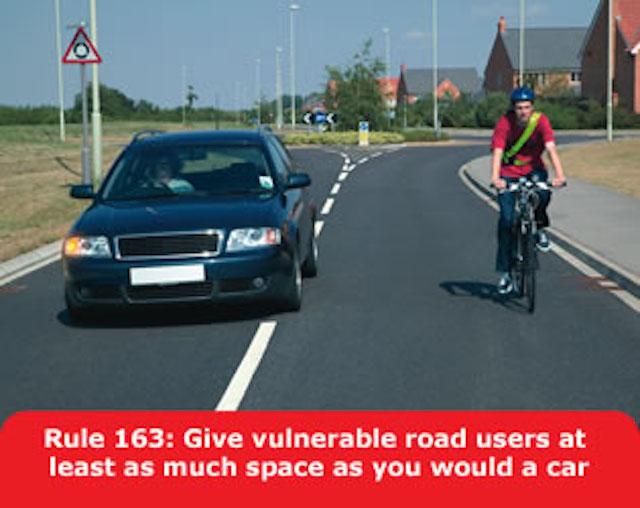 Britain’s Highway Code spells it out for motorists – get in the other lane when overtaking cyclists.DFT

SEAT’s press release talked of the Tarraco’s cyclist-detection features, and a company video shows the technology in action.

“When the assistant on the SEAT Tarraco detects an imminent collision [with a cyclist or pedestrian] in 1.5 or 2 seconds, it activates an audible and visual warning,” states SEAT’s statement.

“If the driver does not react, the car automatically begins an emergency braking manoeuvre between 0.8 and 1 second before the possible accident takes place.” 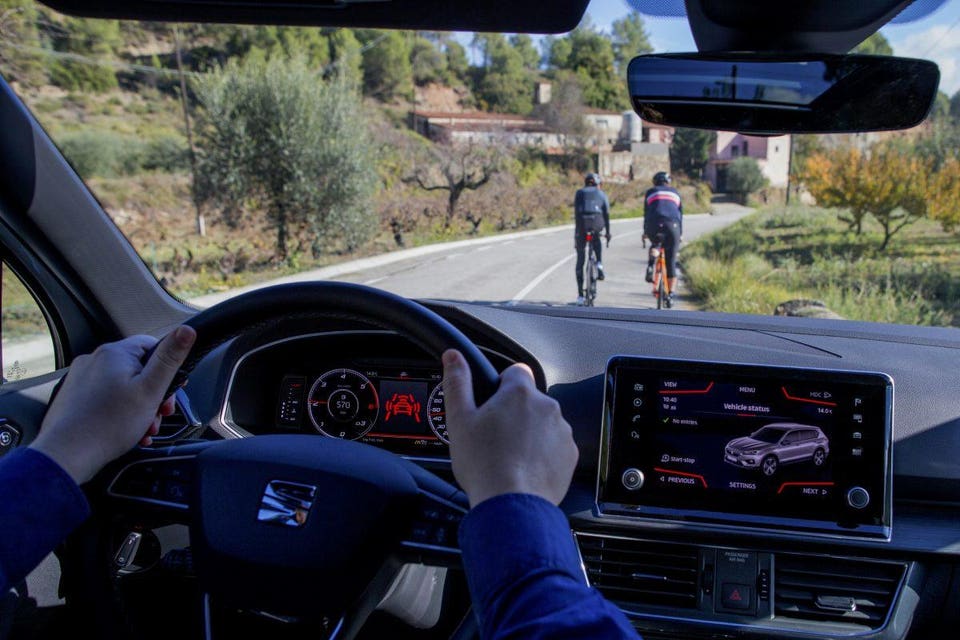 According to Alcantara, in the real world this means that “when driving down a road at 72 kmh, the car would begin to respond approximately 20 meters before a possible collision.”

Alcantara is in charge of SEAT’s “Active Safety” technology program but he stressed that machine learning is not perfect:

“This kind of assistant is no substitute for the driver’s obligation to remain alert, respect traffic regulations, reduce speed and maintain the safety distance when passing a cyclist,” he said.

Safety protocols from the European New Car Assessment Programme – Euro NCAP – now include assessments of cyclist-detection technology. The protocols were developed by the Dutch Ministry of Transport.

Euro NCAP board member and senior policy advisor at the Dutch Ministry of Transport Robbert Verweij said earlier this year: “It was the drive to save cyclists’ lives which inspired the Dutch government to fund a major project which led to the development of a protocol for detecting cyclists.”

Automatic emergency braking systems have been offered as an optional upgrade for many cars since Volvo introduced them in 2009 – they initially aimed to avoid collisions with cars and trucks, and later versions also added pedestrian and cyclist detection, but until earlier this year there was no standardised protocol for automakers to meet or exceed.

Verweij added: “This first Euro NCAP release of a AEB-Cyclist-equipped vehicle shows what the joint efforts of governments and cyclists’ associations can achieve in collaboration with Euro NCAP.”

Secretary General of Euro NCAP Michiel van Ratingen said: “Our new assessments demonstrate the increasing level of sophistication that can be achieved by connecting various sensor systems installed on the vehicle. As the cost of these systems drops and computing capabilities increase, standard vehicles will soon become able to help prevent significantly more complex real-life crashes.”

Euro NCAP’s testing protocols are advisory only, but they are often used as selling points in automaker’s marketing materials so tend to get adopted.

The cyclist-detection with automatic emergency brake technology testing has been welcomed by the UK’s AA motoring organization.  AA president Edmund King said: “Drivers should always be responsible and alert for cyclists but technology can add extra protection. We welcome the new assessments to add further protection for cyclists and pedestrians.”

The new assessment has been tested for the first time on the latest Nissan LEAF electric car. It is included in a new designation called Automatic Emergency Braking Pedestrian Vulnerable Road Users, or snappily AEBVRU for short. The LEAF got a five-star rating, the top result.

Detecting cyclists presents new challenges to car manufacturers, both from a hardware and a software perspective: sensors must have a wide angle of view to detect fast-moving cyclists in good time, and complex algorithms are needed to ensure correct identification of potential collision threats while avoiding false activations.

Lead author James Lenard, a research analyst at Datarye and visiting fellow at Loughborough University, found that “almost complete 180-degree forward vision is required to provide a 90 percent detection zone for cyclists.” (Collisions with pedestrians rarely occurred outside a frontal viewing zone of 35 degrees.) The study – published in the Accident Analysis & Prevention journal – looked at the crash data from 175 pedestrians and 127 cyclists.

This dataset extracted time-to-collision information, and was compiled for the U.K.’s  Department for Transport in conjunction with Thatcham Research and the U.S. Insurance Institute for Highway Safety.

The data showed that motorists tend to encounter many more cyclists than pedestrians at road intersections. However, insights from this data – mostly urban – might not work for rural areas or for different countries.

“In countries with more dedicated bicycle lanes, it is conceivable that cars turning across the path of ‘undertaking’ bicycles might be more prevalent than in Britain: this could imply more AEB ‘rear vision,’” Lenard explained.

“In countries with higher impact speeds than Britain, a longer [detection] range might be beneficial.”

I am the Transport Journalist of the Year in the Press Gazette British Journalism Awards For Specialist Media 2018. I write about bicycles and research transport history books.