On June 26th, 2018, Alexandria Ocasio-Cortez amazed New York City and the United States when she defeated incumbent Joe Crowley in the Democratic primary to represent New York’s 14th congressional district. Ocasio-Cortez, 28, is a political activist, progressive, and former bartender, whereas Crowley, 56, was anointed by the so-called “Queens machine,” has been in Congress since 1999, and had about 15 times more money than Ocasio-Cortez to spend on his campaign. The result was the biggest upset of the 2018 midterm elections and a timeless tale of dedication triumphing over complacency.

On the surface of it, this election result would appear to have nothing to do with bikes, but as a holistic cyclist I happen to believe that on a metaphysical level everything has to do with bikes, and this result is no exception. In fact, on the eve of the election, Ocasio-Cortez and Crowley engaged in something of a rhetorical proxy war over a proposed protected bike lane project in the Queens neighborhood of Sunnyside, which lies inside the district.

The impetus for the project was a death and a near-death. First, in the spring of 2017 a drunk driver killed Gelacio Reyes as he rode home from work. Less than two weeks later, a box truck driver nearly killed another cyclist at the same intersection. In response, City Council Member Jimmy Van Bramer demanded that the Department of Transportation install protected bike lanes, and in November of that year the DOT presented their plans to the local community board for redesigning Skillman and 43rd Avenues in order to make them safer for everybody.

When a street floods due to a broken water main, the city tears it up and fixes it as quickly as possible. When people are killed due to broken street design, the city first subjects any proposed changes to an interminable series of presentations and forums in which people with absolutely no qualifications proceed to pick the proposal apart like raccoons in a trash can. Protected bike lanes in New York City have been a resounding success, and data shows fewer injuries, faster travel times, and greater retail sales on streets where they’ve been installed. Nevertheless, a small but vocal segment of the population continues to believe bike lanes are responsible for everything from the high cost of real estate to the Mets’ dismal 2018 season, so instead of simply reaching into their toolkit and fixing the problem the DOT indulges them with what amounts to months of free group therapy sessions during which they blame bikes and the people who ride them for all the ills of society.

In the case of the Skillman and 43rd Avenue bike lanes, these group therapy sessions soon went full primal scream. A parents’ association representative from a neighborhood school warned that children would walk into the bike lane and get hit by speeding cyclists, as though such a scenario is somehow worse than getting hit by speeding drivers. A cafe owner feared the bike lane would harm his business, since everybody knows cyclists hate cafes. Council Member Van Bramer alluded to a “fanatical element” of cyclists after someone tweeted about throwing blood at him—and ultimately withdrew his support for the project, even though he’d called for it in the first place. Meanwhile, people in the neighborhood and beyond continued to rally behind the proposal, and advocates formed Queens’s first-ever human protected bike lane.

By the time Queens Community Board 2 was finally set to vote on the project on June 7th, 2018, this had become the most high-profile bike lane kerfuffle in New York since Iris Weinshall (wife of Chuck Schumer) helped organize a suit to remove her local bike lane in Park Slope, Brooklyn, back in 2011, and certainly the frothiest in Queens since a community board member elsewhere in the borough opposed a bike lane in February of 2017 because “once Trump removes all the illegals from Corona there won’t be anybody to ride bike lanes.” So, shortly before the community board vote and with the democratic primary just over two weeks away, Transportation Alternatives’ Queens Activist Committee chair Macartney Morris asked Ocasio-Cortez whether she supported the proposal, to which she replied, “I think a bike lane is a good idea.”

The very next day, Joe Crowley weighed in via Facebook:

The following day the community board voted down the bike lane proposal by 27-8.

But there’s the thing about community boards in New York City: they don’t always look like the communities they represent. They’re comprised of people who have the time to cultivate the connections that result in an appointment, and members often serve for decades, which can make them time capsules in an ever-changing city. A casual observer could certainly be forgiven for thinking a vote of 27-8 means Sunnyside doesn’t want bike lanes, but given the makeup of community boards versus the actual makeup of the neighborhood it’s about as meaningful as saying “More Doctors Smoke Camels Than Any Other Cigarette.”

Later that month, on primary day, Alexandra Ocasio-Cortez beat Joe Crowley by 15 percent, or by just over 4,000 votes. The majority of voters in the immediate vicinity of the proposed bike lanes went with Ocasio-Cortez. Evidently the 2,200 constituents Crowley claimed had reached out to him to oppose the bike lanes weren’t enough to win him the election. Perhaps they couldn’t find parking at the polls.

There’s still a prevailing narrative, even in New York City, that drivers’ interests are paramount, and that we should be careful not to inconvenience them when planning for bike infrastructure. Increasingly, however, whether it’s election results or the massive popularity of bike share, the number simply don’t bear this out, and the attitude that improvement for cycling should happen incrementally if at all is growing as ossified as the people who perpetuate it. Ocasio-Cortez seems to understand this, which is probably why she went riding with Queens advocates this past weekend:

Although bike lanes aren’t strictly a Congressional issue, they’re certainly part of the larger picture of a just transition to a sustainable economy + city.

I don’t own a bike (it’s too dangerous in the BX) and use public transit. Joining #BikeQNS for a ride was eye-opening!

Our future Congressional rep just came on a #BikeQNS adventure to talk #safestreets in the district and ride on our amazing #protectedbikelanes! @Ocasio2018 #SaferSkillman #FixQueensBlvd #Safer111 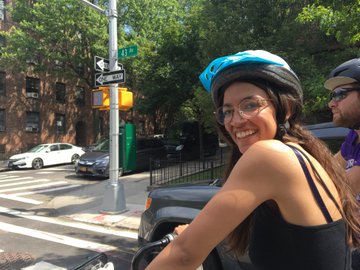 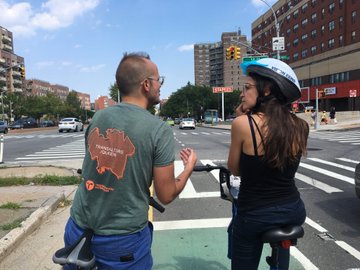 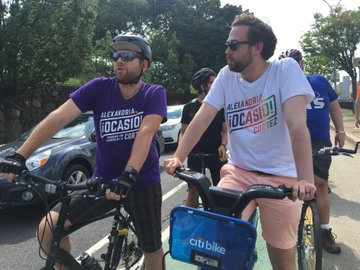 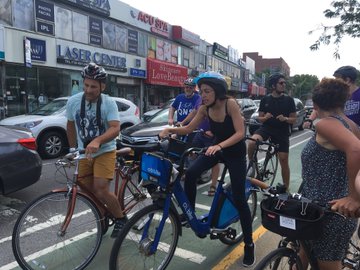 Bikes are the future. Ignore them at your peril.