The Transportation Division has been busy working towards implementing some of the prioritized projects identified in the City of Cupertino 2016 Bicycle Transportation Plan that was adopted by City Council in June 2016. Below provides a brief status summary of these projects. For more information, please visit www.cupertino.org/bikeplan. 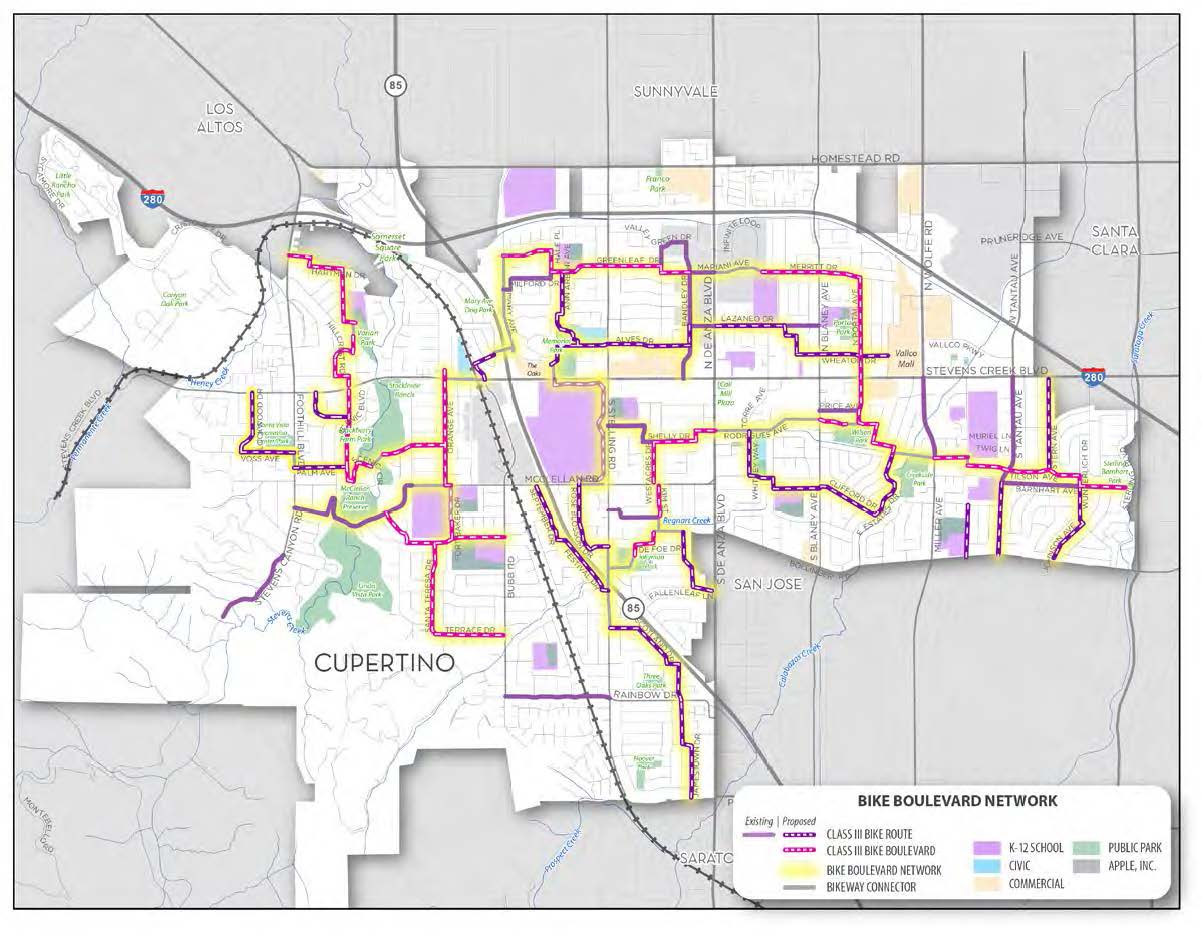 would supplement the City’s existing bike network by providing connectivity between local neighborhood destinations and arterial corridors. These bike boulevards are Class III bike routes, generally on low-volume, low-speed residential streets that are improved with physical features to further calm vehicle traffic, and wayfinding signage and striping to provide an easily navigable network.

After concluding the focused neighborhood public workshops in December 2017, City staff presented an update on the project to City Council on February 6, 2018. The presentation included a summary of each of the seven neighborhood workshops, highlighting the initial recommendations, comments received, and revised recommendations based on community feedback. The video of the council meeting can be found here.

City staff plans to move forward with implementing the revised recommendations presented at the Council meeting and is currently negotiating a proposal with an engineering firm to prepare construction documents. Additional outreach to the neighborhoods that need further study is also being conducted concurrently. To date, staff has conducted follow-up meetings with Neighborhoods #1, 2, and 5, and will be scheduling meetings with Neighborhoods #6 and 7 in the summer.

The City hosted public meetings on the evenings of February 20, 2018 (Meeting #2a) and February 26, 2018 (Meeting #2b) to present conceptual plans of the proposed trail and to solicit community feedback. A total of approximately 40 people signed into both meetings, all of whom were asked to submit written comments on the input packets, flip charts, and plans that were distributed and displayed at the event. The meeting materials and summary memo are available to view and download on the project webpage.

City staff also presented an update on the project to City Council at their April 17, 2018 meeting. Based on feedback received at these previous meetings, the conceptual plans were further refined and will be presented at Meeting #3 on Wednesday, June 6, 2018 from 6:00pm to 8:00pm at Cupertino Community Hall (10350 Torre Ave). We encourage your participation.

The City is working with HMH Engineers to prepare and deliver a feasibility study for the proposed Regnart Creek Trail, an off-street bicycle and pedestrian facility that would provide a connection between Pacifica Drive and Creekside Park, along Regnart Creek,

The City hosted the third and final public meeting for this project on the evening of April 23, 2018 to present conceptual design recommendations for the proposed trail that were developed based on comments received at previous meetings and discussions with Santa Clara Valley Water District. A total of approximately 65 people signed into the meeting, all of whom were asked to provide feedback by submitting comment cards and a trail design preference worksheet that were distributed at the event. The meeting materials, summary memo, and a video of Captain Urena’s address are available to view and download on the project webpage.

The final feasibility study is expected to be presented to City Council in the Summer.

The City is working with Alta Planning + Design to prepare and deliver a feasibility study for the proposed Historic De Anza Trail, a 5.1-mile off-street bicycle and pedestrian facility alongside the active Union Pacific Railway corridor, beginning in Saratoga and continuing north to Rancho San Antonio Open Space Preserve. The corridor follows the historic route of Juan Bautista De Anza, which is a 1,200-mile long route taken by the De Anza party which led to the establishment of San Francisco.

The City will be conducting pop-up events at various locations along the proposed corridor on the morning of Saturday, June 2, 2018 and midday on Thursday, June 14, 2018 to speak with neighbors and passers-by for initial neighborhood feedback. A community-wide open house is scheduled on Thursday, June 21, 2018 from 6:30pm to 8:00pm at Cupertino Community Hall (10350 Torre Ave). For more information, please visit the project website at www.cupertino.org/deanzatrail.

Unsubscribe from all City of Cupertino, CA eNotifications.