McClellan Road/Pacifica Drive
Conceptual designs for Class IV (separated) bike lanes along McClellan Road between Byrne Avenue
and De Anza Boulevard, and along Pacifica Drive between De Anza Blvd and Torre Ave, have been
completed. Staff is currently in the process of preparing construction plans for this work, which
has been divided into three construction phases to streamline implementation:
• Phase 1: Imperial Ave to Stelling Road
• Phase 2: Stelling Road to Torre Ave
• Phase 3: Byrne Ave to Imperial Road

Staff anticipates construction beginning on the Phase 1 portion in Summer/Fall, 2018, with the
Phase 2 segment following shortly thereafter. Segment 3 will be the final phase to be completed,
due to numerous right-of-way challenges along that segment which need to be resolved. A public
outreach meeting will be conducted in the Spring to inform the community along the Phase 1 segment,
and to continue working towards addressing the challenges present along the Phase 2 and 3 segments.

Stevens Creek Blvd
Conceptual designs for Class IV bike lanes along Stevens Creek Boulevard have also been completed.
The project is only partially funded at this time; a contribution from Apple will enable
engineering design to begin on the segment between Wolfe Road and Tantau Ave in the Spring and
construction later this year. A Request for Qualifications for engineering design consultant
services for this segment will be issued within the next few weeks. Staff is currently seeking
grant funding for the Wolfe Rd-to-De Anza Blvd segment, including Senate Bill 1 and the Road to
Zero program sources.

Bicycle Boulevards
Bicycle Boulevards are Class III bike routes, generally on low-volume, low-speed, residential
streets that are improved with physical features to further calm vehicle traffic, and wayfinding
signage and striping to provide an easily navigable network, consequently encouraging bicycling by
enhancing safety and comfort for bicyclists. Funding for the design and construction of the first
phase of bicycle boulevards in the amount of $1,417,000 was approved by City Council in June, 2017.
Staff has developed preliminary design concepts for this first phase of bicycle boulevard
improvement implementation, and assigned these bicycle boulevards to one of seven neighborhood
groups, roughly based on geographic location, in order to facilitate public outreach efforts. The
recommended roadway improvements varied by street, and were selected based primarily upon the
geometrics of the street, existing traffic control devices, route alignment, and measured traffic
volumes and speeds.

After conducting an initial citywide open house in May 2017, Transportation Division staff held
focused public workshops for each of the seven neighborhoods between September and December 2017 to
present the proposed improvements to the residents and receive feedback. In order to encourage
resident participation, the workshops were held in locations proximate to the specific
neighborhoods. Attendance at the workshops varied from a minimum of two, to a maximum of 31
residents, with neighborhoods #1, 4 and 6 being the most engaged.

With this feedback from the neighborhoods in mind, staff is moving forward in developing final
recommended improvements. A study session with City Council occurred at their February 6 meeting
in order to update Council on the progress to date and to inform them of staff’s recommended
improvements moving forward; Council was overall supportive of staff’s recommendations. Staff will
likely hold one additional neighborhood meeting at a few of the more engaged neighborhoods (to be
determined) before proceeding with constructing improvements at those locations.

Junipero Serra Trail
The Junipero Serra Trail is one of the trail segments that comprise “The Loop”. It will provide an
off-street bicycle and pedestrian facility that runs parallel to the existing Junipero Serra
Channel (south of Interstate 280) and Calabazas Creek and provide a direct connection between the
Don Burnett Bicycle-Pedestrian Bridge and Vallco Parkway.

Staff has assembled a Technical Advisory Committee (TAC) comprised of Santa Clara Valley Water
District, Caltrans, PG&E, VTA, Cupertino Sanitary District, and Cal Water staff to help guide the
technical development of the feasibility study. The first public meeting was held on Wednesday,
December 6, 2017 to introduce the project to the community. Approximately 30 people signed into
the event, all of whom were invited to provide feedback to City staff and project consultants
during the event through one-on-one discussions and by submitting written comments at the event.
Conceptual development of the proposed trail has begun based on the comments received by the
community and feedback from the TAC. Alternative alignment plans are scheduled to be available for
public review and comment at public workshops scheduled for February 20 at the Quinlan Community
Center, and February 26 in Community Hall. Staff anticipates bringing the draft feasibility study
to Council in December, 2018.

Regnart Creek Trail
The Regnart Creek Trail is another of the trail segments that would make up “The Loop”. It will
provide an off-street bicycle and pedestrian facility that runs parallel to the existing Regnart
Creek and provide a connection between Pacifica Drive and the existing Creekside Trail at E.
Estates Drive.

A walkshop was held on Saturday, November 18, 2017 to introduce the project to the community and to
give residents an opportunity to walk a portion of the proposed trail escorted by City staff and
project consultants. Approximately 60 people signed into the event, all of whom were invited to
provide feedback to staff during the event and by submitting comment cards that were 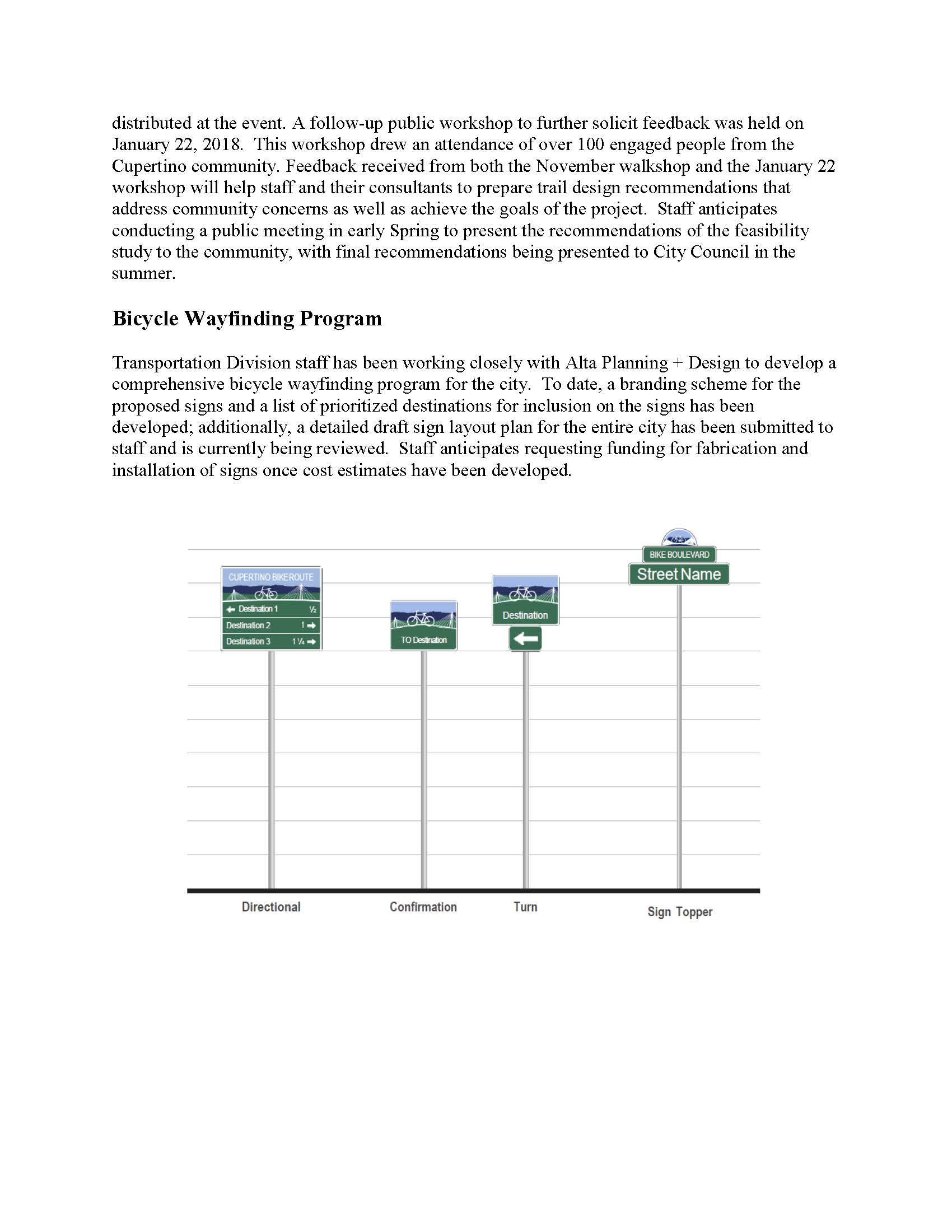