Cost of Construction: $1.885 million (plus cost of fencing on private land granted to nearby neighbors, currently $1.9M). Construction of the trail itself will be covered completely by a Measure B grant of $1.885M. Fencing will come from the city general fund.

Type of Project: Pedestrian Path and Class I Bike Facilities (Trail) (see here for an explanation of different types of bike facilities)

The trail portion of the project has started construction with Redwood Construction, and is expected to be completed in December 2021. Nine bids were received for construction of the trail and the lowest appropriate bid was accepted.

Due to increased lumber prices, on June 1, 2021, the City Council approved a $1.2M increase in fencing funding, bringing the total fencing cost to almost $2M. The City staff at that time also stated that the project opening would be delayed due to construction of the fencing until August 2022.  For more information on this, see our article here.

The trail itself is complete as of April 2022; private fencing work is in progress. Per staff, the trail will not open until the private fences and walls are installed and complete, which is expected late fall 2022. 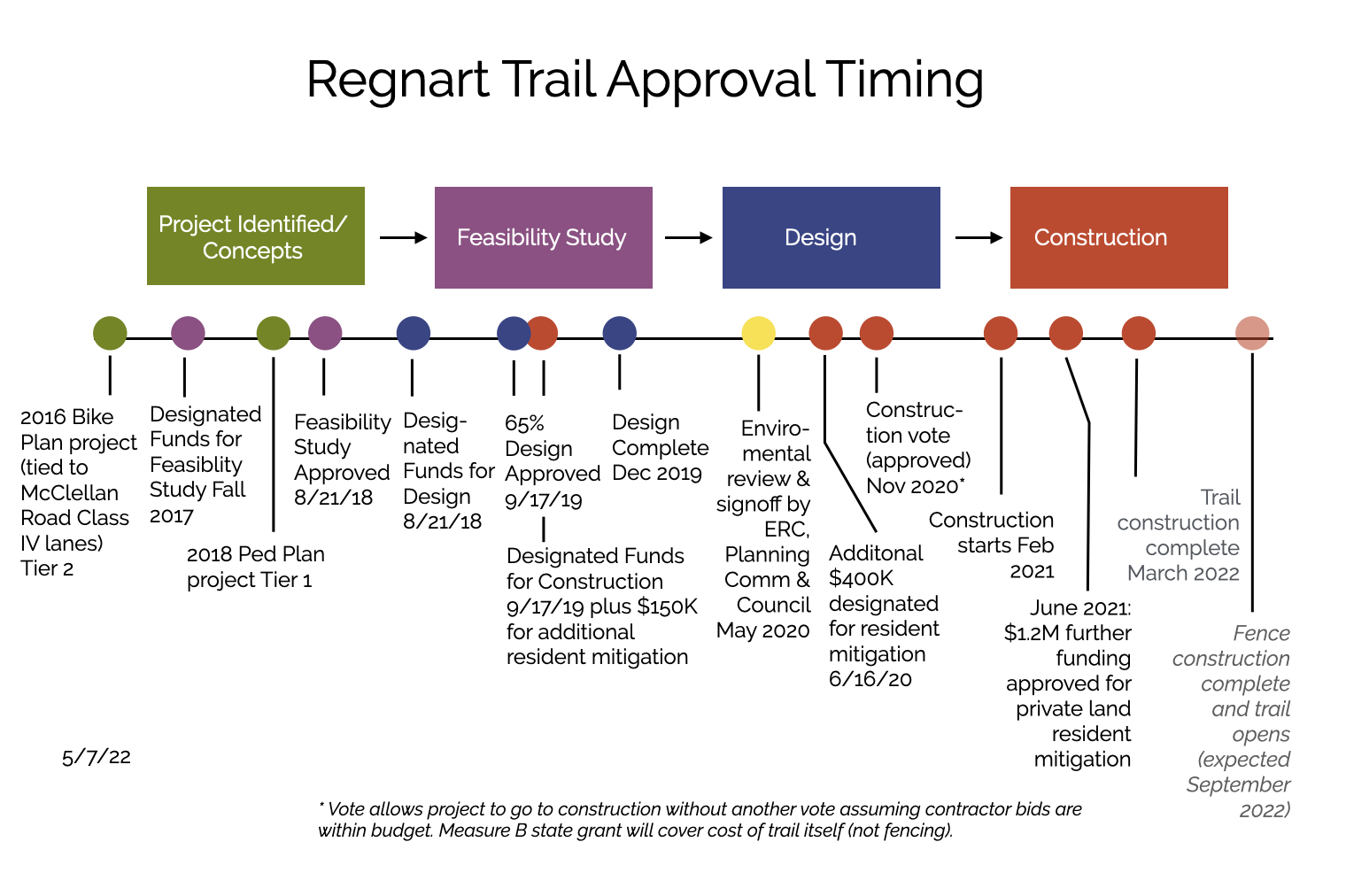 The project was initiated in September 2017 with the beginning of a Feasibility Study. The Feasibility Study was approved in August 2018, and the design was funded at that time. Option “D” (see below, in “Trail Options”) was approved for construction on 9/17/19 by the City Council after review of the 65% design. The project was not moved forward, but was brought for a vote after another year, mainly due to Council direction for unprecedented amounts of outreach on fencing with local neighbors–in addition to the two years prior to design approval. (See below for a discussion on the fencing issues with this project.) The environmental study was completed and approved by Cupertino’s ERC, Planning Commission and Council in May 2020. Both the initial design phase and second design phase is complete. On November 17, 2020, the City Council voted to allow the project to proceed to construction without another delay or vote, if the construction bids were on budget. They also declined at that time to add any more public taxpayer funds to the budget for the private home improvements of new fencing/walls that the adjacent neighbors have been granted. On June 1, 2021, due to temporary rising lumber costs, the City Council approved another $1.2M toward the fencing funding, bringing the total fencing cost to approximately $2.0M (similar to the trail cost itself), and the project completion was subsequently delayed until August 2022.

November 2020 update: A note on the noise abatement fencing costs of $765,000 granted by City Council to nearby neighbors

The City Council approved construction funding on 9/17/19 of $2.1M which included new wooden seven foot fencing for all neighbors adjacent to and across the creek from (approximately 40 feet away or more). They also on that date added an additional $150K for fencing/privacy measures for all of those residents on top of the costs for the brand new standard seven foot wooden fences.

All fences would be constructed on the private land of the residents, not city land. A resident could opt for not getting a new fence, and keeping whatever fencing they had currently in their yard. This would allow residents to keep their gates to the trail, as any new fencing paid by the City of Cupertino would not include a gate at the request of Valley Water, who owns the land the trail will be built upon.

The following June 17, 2020, the City Council then approved an extra $400K for special noise abatement sandwiched fencing, or another type of fencing that the residents preferred. (If the cost was higher, the difference would be paid by the homeowner). Including the funds for new wooden fences from the original project estimate, this resulted in $765K in extra noise abatement funds for residents adjacent to and across the creek from the trail. With the total project costs now at $2.65M, the cost of these private-land fences is now almost 30% of the total project costs.

The city staff has been in negotiations with the neighbors about what they would like for fencing for three years now. For the first two years, despite many public meetings and hundreds of hours of 1:1 meetings held at residents’ homes, there were still very few of the residents adjacent and across the creek who were willing to discuss what they would accept for fencing. After the September 2019 vote when the project moved forward, City Staff has continued with extensive outreach including many more personal meetings. This work resulted in neighbors choosing a variety of new fences that the city would pay for, including seven foot wooden fences, open cell mass-loaded vinyl, composite PVC, and pre-cast concrete walls. All the options other than the concrete walls would be fully paid for out of city funds.

It should also be noted that for no other trail or walk/bike project in Cupertino has the city provided new fences or walls on residents’ private land, and it is also unknown for other neighboring cities. Municipalities don’t do this because it opens up public finances for potential corruption, by allowing public funds to be diverted to improvement projects on friends’ or families’ privately held land. The City Council has provided these funds in a good-faith effort to appease the neighbors abutting the trail that do not wish for it to be built, but this sets a terrible precedent for future public works projects.

The independent environmental review passed by the ERC, Planning Commission, and reviewed by the City Council did not show any increased noise expected for the project during its use (aside from noise created while the trail is being constructed, and only in one area). The Sheriff has stated the trail will be safe, and additional crime is not expected, based on local, state and national trails–including our own Saratoga Creek Trail only a mile away. There does not appear to be any scientific or objective reason to believe that specialty fences or walls are needed for “protection” or “safety” over what is currently existing.

On November 17, 2020, the neighbors who chose to have the city build a concrete wall (instead of specialty noise-attenuating fences which are fully funded) as their new fencing asked to have the complete cost of these walls covered by the city budget, for a total of about $28,000 per home in funding for improvements to their personal property. The City Council declined to do so at that time.

Due to temporary rising lumber prices (they fell again within a few months of this vote) the City Council voted on June 1, 2021 to allocate an additional $1.2 million for resident fencing, bringing the total amount for private amenities to almost $2 million. At that time, the project completion was also delayed by nine months to August 2022. This change made the fencing costs to just about half of the total project costs.

It will be a safer, off-road route to three parks, two schools and City Center. Residents can get to events, schools, library & shops without a car more safely. Over 250 Eaton Elementary students and 250 Cupertino High students will benefit, as this trail is on their direct commute path.

Families, seniors, and the entire community will enjoy walking and biking on this leafy 2.4 acre recreation path along the creek. It connects with both Creekside Park paths (connecting directly to the existing bridge into Creekside Park) and Wilson Park paths for additional walking, running and biking space.

Trails get people outdoors, walking & socializing with their neighbors. This increases community health & connection for all residents.

More residents walking and biking means fewer cars competing for parking spots at City Center. This is going to be especially important with the proposed library expansion.

As cars are the greatest danger to pedestrians and cyclists, avoiding interactions with them means fewer accidents while walking and biking. The new crossings at Blaney and E. Estates will be significantly more visible than the current offset crossings at Rodrigues or Suisun/Clifford, and include flashers for more visible crossings. The E. Estates crossing will include a raised crosswalk, which will allow a much more visible crossing at the end of the Creekside Park trail, which currently ends abruptly in the middle of a block. The crossing at Blaney will include curb extensions to reduce the width of the crossing while still maintaining the bike lane along Blaney. Cyclists will not need to make an unprotected left turn from La Mar or Pacifica onto Blaney to continue to/from the City Center.

Using alternative transportation and reducing pollution is great for everyone. By encouraging biking and walking, this trail will result in fewer cars, less traffic, and cleaner air. Encouraging walking or biking to school plus reducing demand for parking at City Center will allow for less idling of vehicles as they wait for children or for a parking spot.

Multiple studies have shown that homes close to trails see up to a 32% increase in property values and trails are a top amenity that homebuyers look for in their purchase. Thousands of current homeowners could benefit from this new trail.

Everyone can enjoy this public land space, not just the residents along the trail who have gates to it for personal use, enjoy it as extra unused space, or use it for extra parking.

This 2.4 acres of recreational space (which is not counted in city “park space”) is an great value and opportunity at $2.1M, especially in an area low on space. Many homes in Cupertino cost $2M for only one lot. 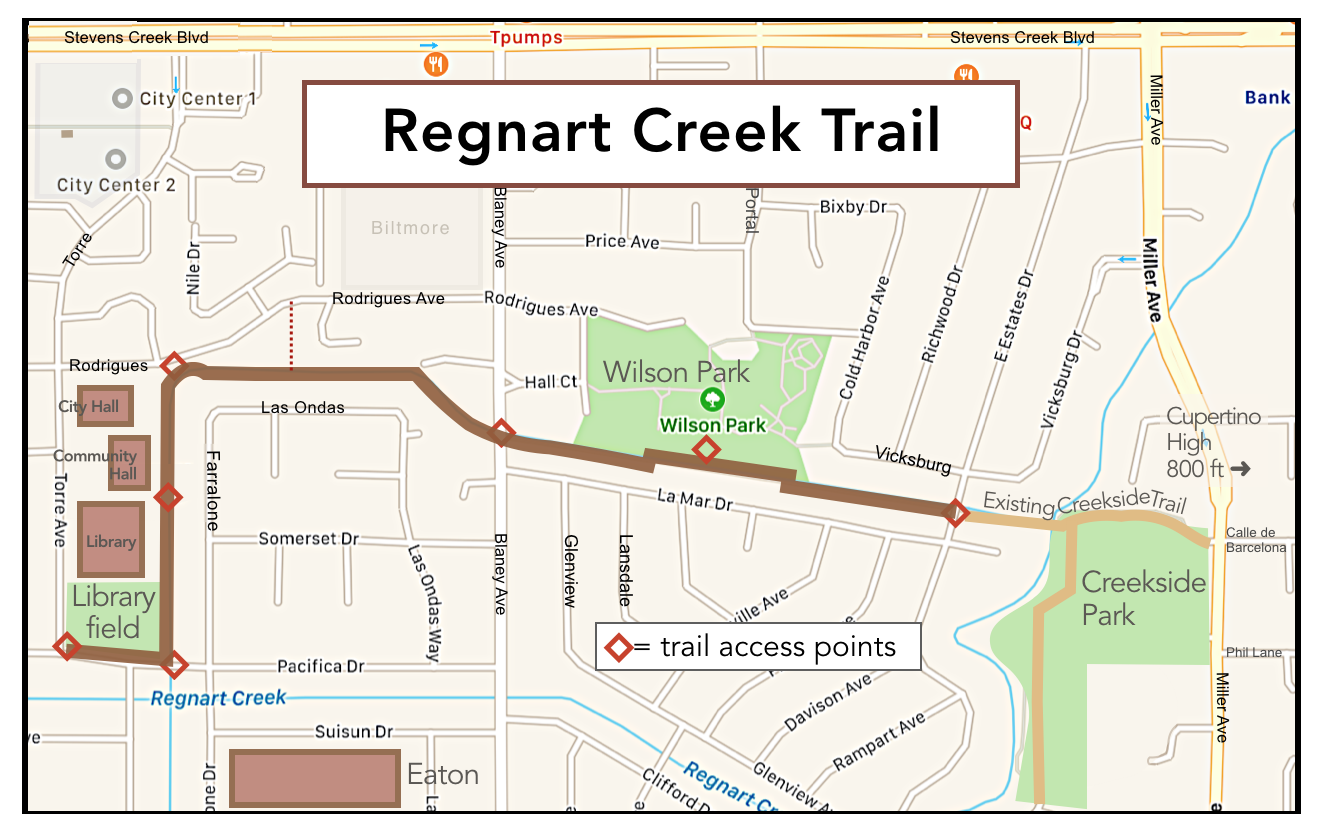 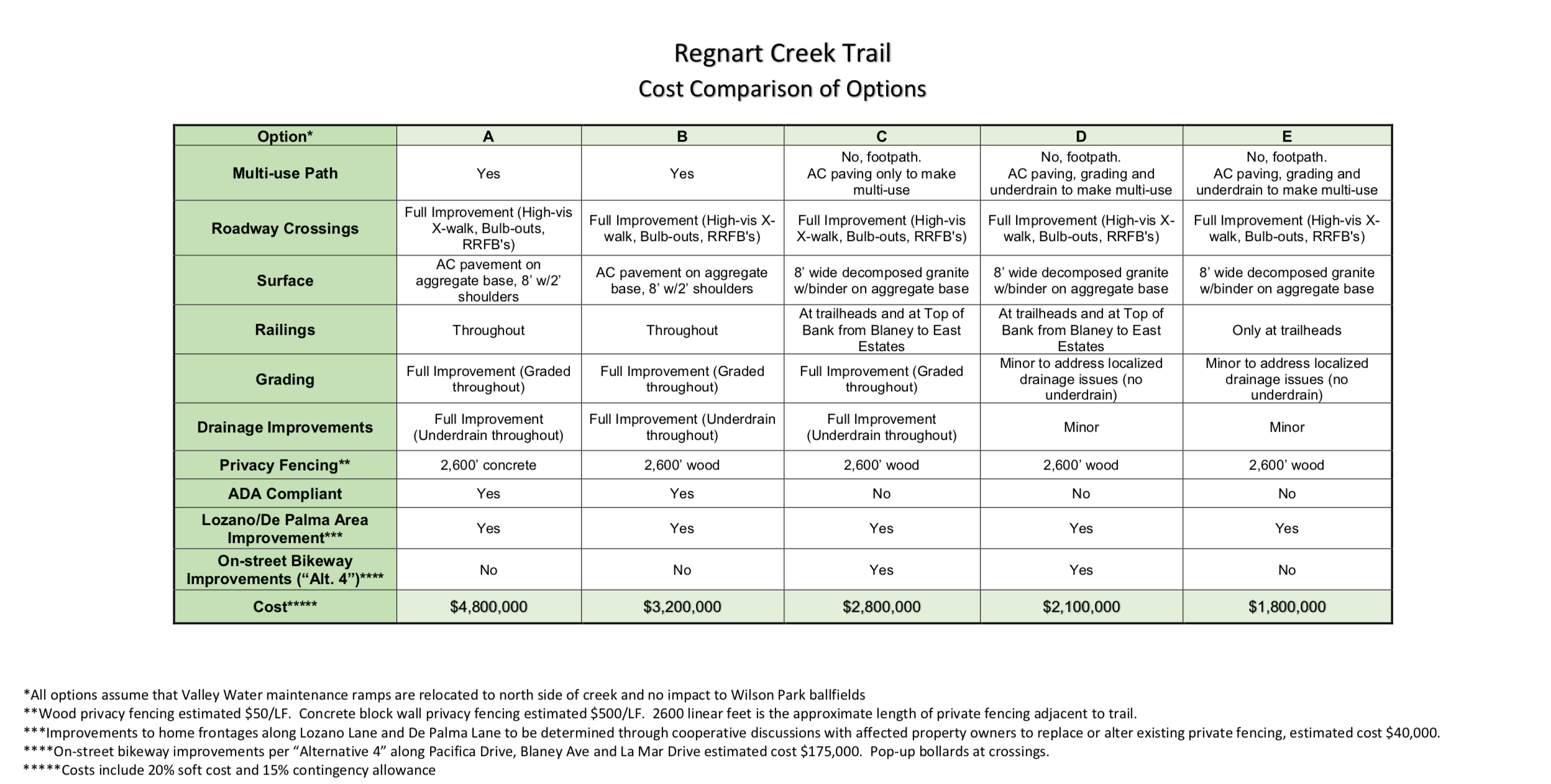 Provided information, maps and data to residents, City Council and Staff regarding usefulness of Bike Boulevards to connect neighborhoods, to improve access for seasoned cyclists, for reduced traffic, and to encourage greener lifestyles;

Sent emails of support to City Council and encouraged other residents to do the same;

Coordinated and gave vocal support at City Council meetings, when this topic was to be discussed;

Met with City Staff, Bicycle Pedestrian Commission, and Cupertino City Councilmembers and attended public outreach meetings to discuss details of the various projects and to encourage progress and adequate staffing.