Major bicycle and pedestrian projects go through the Master Plan process, which is shown in the flowchart. At all stages, there is public input which is a key driver of suggested improvements. Every 5 years (or so), there is a new Bicycle Transportation Plan and Pedestrian Transportation Plan created. The current iterations were approved by City Council in 2016 (Bike Plan) and 2018 (Ped Plan), with the majority of the work in creating these plans occurring in the year prior to the adoption by City Council.

Each plan includes a list of prioritized projects, which are separated into Tiers. Though each numerical score of a project gives a general idea how high it ranks, differences of 10 or so points are not statistically significant and projects should not be rank-ordered by their strict numerical rating. The projects are considered prioritized by their Tiers, not within them by their ranking number. Lastly, the Bike and Ped plans both have a list of projects that are individual segments of a larger project so the list is much longer than the actual number of projects. For example, the overall McClellan Road Bike lanes project is broken into five separate projects in the Bike Plan, all of which are required to complete the lanes.

After these plans are created, and the projects prioritized, each project goes through the same stages of Concepts, Feasibility Study, Design and then Construction with City Council reviews with public input during and after each stage. Projects generally progress over multiple years, with larger projects for obvious reasons taking the longest. A sample timing with notes is shown below for the McClellan Road bike lanes.

Smaller projects will likely not have a Feasibility Study. For many projects, some of these milestones will not be “in order”, especially regarding funding. For each project, it is best to consult the individual project page to determine what milestones have been completed.

Process for creating the foundational documents that prioritize each project 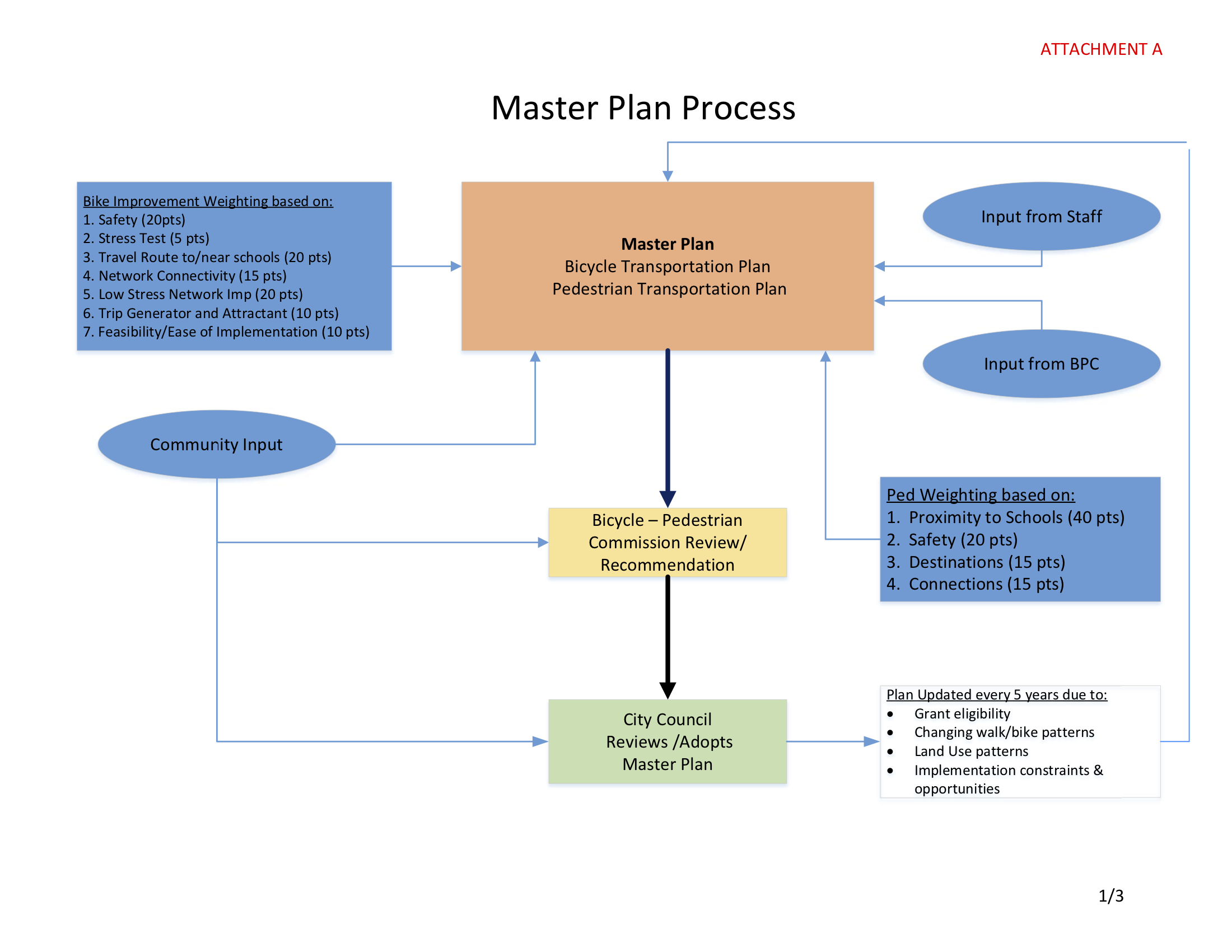 Process for once a project has been prioritized 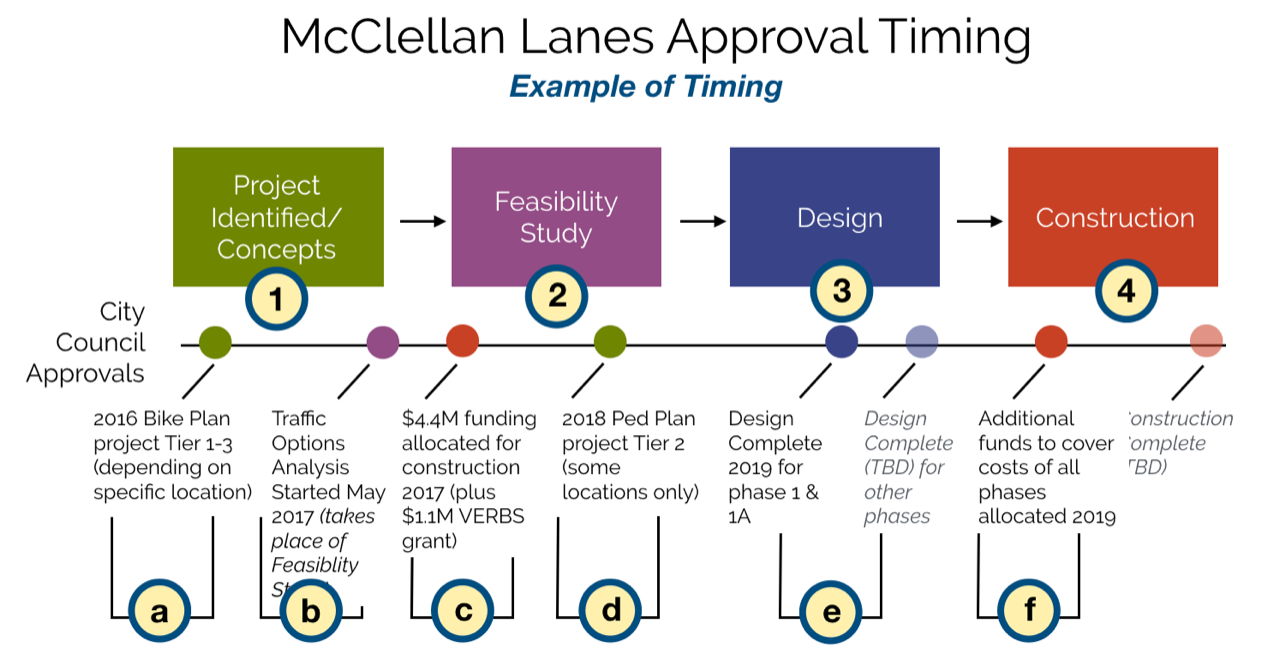 Below is an example of timing for a specific project, the McClellan Road Class IV Bike lanes, which was identified in the 2016 Bicycle Transportation Plan.

It explains the process of approvals for projects, and discusses common exceptions.

1.  Identifed Project/Concepts Phase includes Right-of-Way discussions (public outreach) with neighbors, which can be lengthly. The projects are identified from the 2016 Bicycle Transportation Plan (“Bike Plan”) or the 2018 Pedestrian Master Plan (“Ped Plan”) based on the Tier, or priority, in which they have been designated when the plans were created. They can also be initiated by donations to the City of land or by City Council direction.

2. The Feasibility Study Phase may not be required for smaller projects, such as adding Wayfinding Signage. At the beginning of this phase, funds will be requested from City Council to create the study. Public outreach is a focus of this phase, as resident input will influence the end design and ultimate cost of projects. When the Feasbility Study is complete, it will be brought to City Council to show the work has been completed. This does not automatically mean that the project will go forward even if the study is approved; funding will need to be allocated for the cost of designing the project as a separate item for the project to go to the next phase.

3. The beginning of the Design Phase includes a short time bidding for the design work (for larger projects) and then a design process that includes continued public outreach. Rarely, the City Staff will bring a project back for approval to the City Council in the middle of the design process to confirm the design direction. When design is complete, the project will be brought to the City Council to determine if the project will be constructed. If so, funds will be allocated for construction (if not covered by other sources).

4.  Before Construction can begin, there is a bidding process which can take several months. If the bids are more than the City Council allocated, the project will be brought to City Council for review to increase the budget, modify the project, or to cancel the project. If the bids are within budget, a timetable for completion of the work is created and work commences as soon as practicable.

a.  The 2016 Bicycle Transportation Plan (“Bike Plan”) initiated most projects that are currently in progress. These projects are worked by Tiers, unless other conditions apply, such as donations to the city or new council priorities.

b.  Only large projects have a Feasibility Study completed after initial concepts are created. There is public outreach before, during and after the study. For the McClellan Road Class IV lanes, there was a Traffic Options Analysis instead of a Feasibility Study.

c.  Funding for different phases can be allocated at any time during the process, though usually it occurs after milestones, such as when the Feasibility Study is complete or the design is complete.

d.  The Pedestrian Plan was created two years after the Bike Plan, and many of the projects are the same as they make improvements for both cyclists and pedestrians. The Ped Plan rankings can reinforce the need for specific projects that may be Tier 2 or 3 in the Bike Plan, but Tier 1 in the Ped Plan.

e.  Design may be completed in phases, with construction progressing in a first phase while design may not be complete or even started for the other phases.

f.  Additional funding may need to be allocated if a project is completed over several years, due to inflation and unforseen costs due to delays or starting/stopping of various phases. City Council will review the project and determine whether to spend extra funds on the project.