Current Status (November 2021): Phase 1 (Wolfe to Tantau) has completed construction January 2021. Phase 2 (Wolfe to I-85) is currently in design. Phase 3 (I-85 to Foothill) has completed concept work only. City Staff is expected to request funding for design of phase 3 in the next year’s Capital Improvement Plan (CIP) budget. 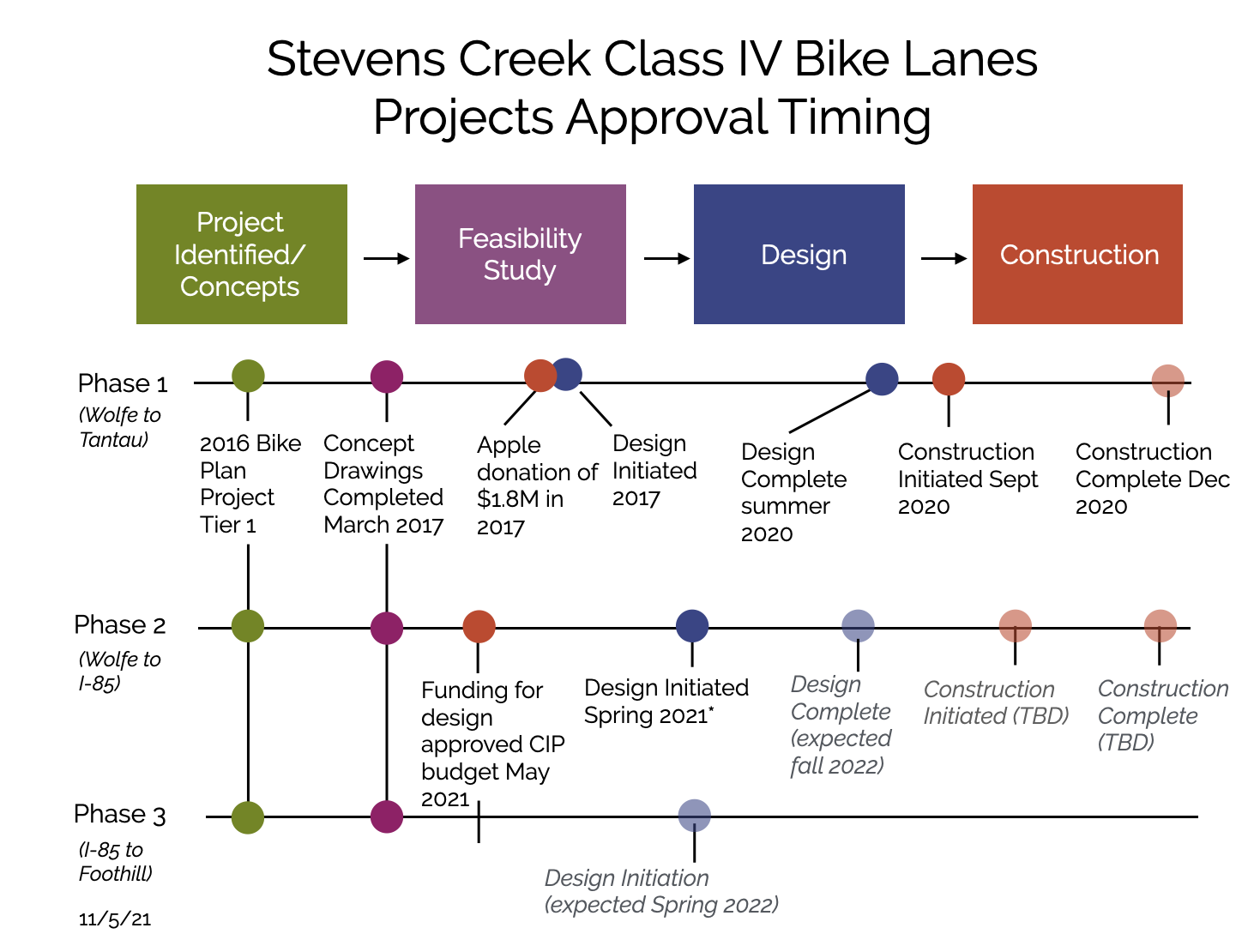 Safer for cyclists on one of our highest speed roads

It will be a safer biking connector to Cupertino High, and to shops, work and destinations. Class IV lanes are the safest type of biking infrastructure after trails, as they are physically divided from cars. (As Stevens Creek Boulevard is one of our highest-speed roads in Cupertino, these lanes will likely be used only by adults and older teens.)

Most of the commercial activity in Cupertino is found along Stevens Creek Boulevard and DeAnza Boulevard, so these lanes will be very useful for cyclists to reach shops within our city or to reach destinations such as the library or Sports Center. The Stevens Creek Boulevard lanes will also directly connect to other (coming) bike infrastructure: the Mary Ave Bikeway (connecting to the Don Burnett Bridge and Junipero Serra Trail); the Bubb Road Bikeway (connecting to McClellan Class IV lanes and then to the Regnart Creek Trail and Creekside Trail); and the Portal and Meteor Bike Boulevards.

Every person who rides to work or to shops means one fewer car on the road adding to traffic. Making it safer to bike in Cupertino means that more residents will be likely to get on their bikes.

Using alternative transportation and reducing pollution is great for everyone. By encouraging biking, these lanes will result in fewer cars, less traffic, and cleaner air.

Provided information, maps and data to residents, City Council and Staff regarding number and location of local school children, and usefulness of these lanes to cyclists;

Sent emails of support to City Council and ecouraged others to do the same;

Coordinated vocal support at City Council meetings when this topic was to be discussed;

Met with City Staff, Bicycle Pedestrian Commission, and Cupertino City Councilmembers to discuss details of project and to encourage progress and adequate staffing.